ERCO Worldwide is a global leader in the supply of chemical technologies, products and solutions which enables ERCO and our customers to manage profitable and sustainable businesses. 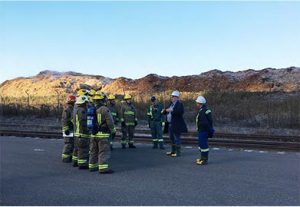 ERCO Worldwide has a long, varied and colourful history of which we are very proud. Our roots go back to the 1890s, to Canada’s early years as a nation and to the beginnings of electro-chemistry as an industrial process. The ERCO story is one of breakthrough science, successive innovations, bold developments and global growth; but also, one of remarkable continuity. We have been fortunate to be led by a succession of remarkable leaders who have provided vision and steady guidance for decades on end.

We have put down permanent roots in nearly all of the places where we have purchased or opened production facilities. This includes our founding location in Buckingham, Quebec, which began producing in 1893 and which remains in operation today. Many of our employees and their families, too, have a rich history with ERCO. They include an employee in Buckingham who is a fourth-generation ERCO worker – his great-grandfather started working at the facility shortly after it started.

W.T. Gibbs and S.P. Franchot obtain a patent on electrochemical manufacture of potassium chlorate to supply E.B. Eddy match works in Hull, Quebec. They build a plant in Masson, Quebec but it burns down within the first year.

The Electric Reduction Company (Limited) is incorporated. It is 51% owned by Anglo-Continental Gold Syndicate, which finances the expansion of the company.

Potassium chlorate manufacture begins in Buckingham, continuing until 1922, when it is shut down so the electrical energy from the generator can be used for phosphorus production. A pilot plant to make phosphoric acid is installed and a plant built.

Company is reorganized under Electric Reduction Company of Canada Limited.

Jim McGilvery, John Winfield and Herb Scribner patent the R3 chlorine dioxide process in 1965 after operating a pilot plant at Thurso, Quebec. The R3 chlorine dioxide generator system, a vacuum, crystalizing process becomes the standard in the industry and ERCO develops its technology sales business. The first full-scale plant is sold to a mill in La Tuque, Quebec in 1971.

Company headquarters, called The Innovation Centre, built at 2 Gibbs Road, Toronto, Ontario, to replace separate sales and R&D locations downtown. Company now has four divisions: Chlorate (including Technology Sales), Phosphates, Agriculture and Technical. As ERCO has the first building in this part of Toronto we named the road after our founder.

Monroe, Louisiana sodium chlorate plant is shut down due to escalating power prices and moved to North Vancouver, where it is re-installed as Line 7 in 1987.

Sodium chlorate Line 1 is started at Buckingham and is the first large scale plant utilizing metal anodes and the new ERCO patented technology.

First R8 chlorine dioxide generator is sold. The R8 generator technology generates chlorine dioxide without chlorine and eventually permits the pulp industry to switch to elemental chlorine free pulp production – and environmental improvement over previous technologies. ERCO goes on to sell over 100 of these plants world-wide.

ERCO purchases Saskatoon, Saskatchewan facility for sodium chlorate, chlor-alkali and calcium hypochlorite from Weyerhaeuser Company. Plant start-ups were chlor-alkali in 1963, conversion from mercury to membrane in 1978, and sodium chlorate in 1980, later expanded in 1990.

Superior Plus Corp. of Calgary, Alberta acquires the business from Sterling Chemicals. The business becomes the ERCO Worldwide division.

ERCO embarks on a multiyear project to upgrade its Valdosta plant to the latest ERCO Sodium chlorate technology. Project completion is scheduled for 2022 and it will add 11,000 tonnes per year of production.

ERCO completes a 5,000 tonne per year Sodium chlorate expansion of the Buckingham plant.

Acquisition of ERCO Worldwide by Birch Hill Equity Partners, a Canadian private equity firm with over C$ 4 billion in capital under management and a history of driving growth in their investments and portfolio companies.